Why Does Electron Beam Welding Need A Vacuum?

The electron beam welding (EBW) process is a method of melting metals together to form a joint. A powerful and highly accurate beam of electrons is fired at the joint, causing the material to melt and then re-solidify to create the weld zone. If there is one word that comes to mind when EB welding is mentioned, it’s vacuum. There are three main reasons that a vacuum is used.

1) The Prevention Of Oxidisation

The combination of heat, atmosphere, and metal carries with it the risk of oxidisation. Some metals – such as iron – are more at risk of oxidisation than others, but any alloy is vulnerable. The result is metallurgical disturbance and a weaker joint, rendering the weld unsuitable for many of the applications that EB welding is traditionally used for.

2) Atmosphere Is Heavier Than Electrons

Atoms such as nitrogen and oxygen are heavy. Electrons weigh less than 1/10,000th as much. Firing electrons through a dense atmosphere leads to collisions, interrupting the beam and wasting energy. This is realised as a loss of heat, a softer beam, and a weaker weld.

Extremely strong electric charges are required to create a powerful electron beam. Arc welding uses this – albeit on a much smaller scale - to its advantage. However, the electric potential used in EB welding is so high that there is the risk of generating an uncontrolled ‘lightning’ effect. These have the capacity to damage both the weld and the electron gun.

Given that each of these are major considerations within the EB welding process, the idea of removing the vacuum seems like a strange one. Despite this, if the vacuum could be removed, the potential for single pass thick section welding of large components becomes a possibility.

The development of non-vacuum welding (NVEB) has focused upon addressing the problems – oxidisation, atmosphere, and arcing – that the vacuum traditionally solves. However, to date, the technology is in an early stage of development.

The problem of the atmosphere causes inevitable scattering. As a result, both the weld depth and the column distance have to be greatly reduced to achieve any kind of reliable weld. To date, NVEB welding has only been successful at a maximum column distance of 30mm and maximum penetration of 50mm. Various attempts have been made to introduce features such as plasma control, but – ultimately – laser welding offers a much more satisfactory result.

This does not mean the end of the road for NVEB. Experimentation continues, and the industry is watching with interest.

Many of the features of electron beam welding are only possible because of the vacuum. Precision, single-pass, and quality guarantee each require the removal of interfering agents such as oxygen. The idea of non-vacuum welding is perhaps plausible, but there is a long way to go. At Electron Beam Processes, we only ever work with the tried-and-tested vacuum. To find out more, download our free guide to best practice.

Here at Electron Beam Processes, we are perfectly equipped to offer useful information and helpful advice to make sure you know everything you need to  when considering electron beam welding services. 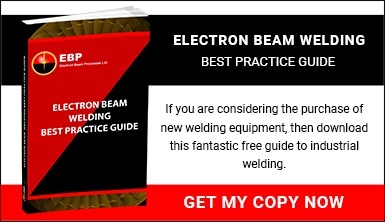